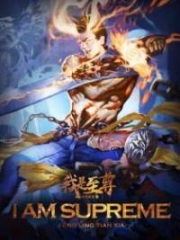 I am Supreme Spread or announce my might in the world, I am the Supreme Medicinal material is poison if it cannot cure; a man who does not become a G.o.d will perish as ashes ……… Heavenly order has flaws, humanly world has injustice Cast aside romance, for evils prevail Misery brings forth kindness, rage won’t lead to disputes Beyond principles and rules, let me carry out the execution Spread my might in the world, slaughter injustice of the world Blade in hand, pa.s.sion in heart; Pa.s.sing judgement for life or death, sentenced by heroes with the blade, Staring at the world with cold eyes, I have no regrets in my life ………. Yun Yang is the central figure of the Nine Supremes of Yutang, heroes of the world. When the Nine supremes were ambushed and killed at Tianxuan Cliff, Yun Yang was the only one to escape the ma.s.sacre albeit with heavy internal injuries. Watch as he takes revenge for his brothers against all those involved.